Ireland is one of the world’s most economically developed countries’. In 2003, Ireland became the second-largest country in the world in per capita GDP, reaching $39,800. In the same year, China’s per capita GDP was only $1,273, and the United States was $38,200.

In the article Ireland relationship to Europe is compared to Taiwan’s with China. Ireland has gradually transformed from ‘European beggar ‘ to ‘European Phoenix’, and Taiwan has fallen from ‘Asian Little Dragon’ to ‘Asian bug’. In 2015 Taiwan’s exporting figures declined by 11%  whereas, Ireland’s export growth rate increased  to 21%.

The success of Ireland’s economy is largely contributed to the Irish government’s tax policy. Ireland’s corporation tax rate is 12.5%. In 2015, the average corporate tax rate for the G20 countries was 28.7%.

The attraction of a large number of foreign multi-national corporations is due to the low tax rate. The following international companies have established their European headquarters in Ireland.

The geographical location is a reason why Ireland is an economically developed country.  It is the westernmost port in the European Union. Ireland neighbours UK, France, Germany, Spain on the right and across the sea is America. A large number of goods are shipped to Ireland and then sent to Europe and the rest of world. For example, the Apple mobile phones assembled by Foxconn in China are airlifted to Ireland before they are distributed to the rest of the European countries.

As a veteran capitalist country, Ireland has not only achieved great economic sucess, but also increased GNH (Gross national happiness). The high per capita GDP has lead to an increase in the welfare and happiness of its citizen’s.

Irish citizens can avail of free education, medical care, and housing support. Each year the Irish government’s expenditure on citizen welfare accounts for almost a quarter of all expenditures.

Ireland’s economic development doesn’t bear a massive burden on its carbon footprint. The island area size is equivalent to half of the area in Guangdong Province. 65% of the island is covered by mountain’s, forest’s and greenery. The country is full of green landscape, so people call it Ireland. The Island country.” 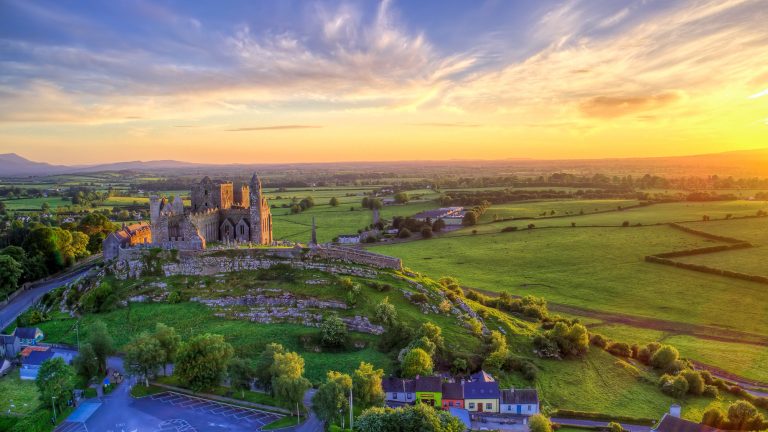 The best pasture for farming in the world is in Ireland. Irish pastures have the world’s finest dairy produce sources. The Irish dairy and meat produce is globally accredited.

Ireland’s capital city is Dublin. Dublin is a city full of life. The streets are cobbled and the doors of the house are colourful and bright. Dublin is also a famous bar city. The streets of temple bar are flooded with party people eager to sink a pint of local Guinness.

The potatoe has a significant meaning to the Irish. In 1849 the “potato famine” broke out. This was a historic event where up to 2 million people died due to starvation. There are many statues in Dublin that portray symbolic events and people of that dark time.